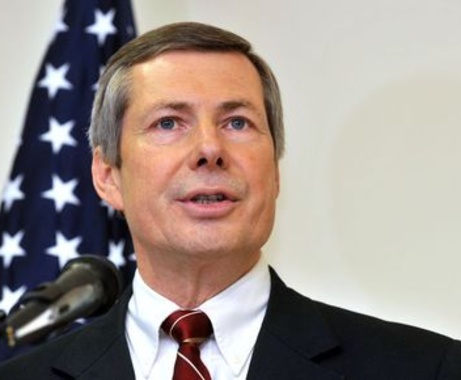 Warlick to step down as OSCE MG co-chair.

The United States will change its OSCE Minsk Group (MG) co-chair, who was engaged in the settlement of the Armenia-Azerbaijan Nagorno-Karabakh conflict.

The current American co-chair, James Warlick, tweeted about it on November 21.

“I will step down as OSCE Co-Chair on December 31,” Warlick tweeted. “It has been an honor to serve in the US Department of State for more than 30 years.”

The OSCE Minsk Group, the activities of which have become known as the Minsk Process, works to find a peaceful solution to the Nagorno-Karabakh conflict for over two decades, but in vain.

Azerbaijani Foreign Ministry’s Spokesperson Hikmat Hajiyev, commenting on the topic, said Baku’s expectations from the OSCE MG co-chairs are not individual, but rather institutional.

“Therefore, in general, co-chairs of the OSCE MG, in accordance with its mandate, should ensure the conflict’s settlement in line with the norms and principles of international law, the UNSC resolutions and the Helsinki Final Act,” said Hajiyev, further wishing Warlick a success in his future activity.

Hajiyev went on to say that eventually, the status quo, which is considered unacceptable and unsustainable by heads of states chairing the OSCE Minsk Group, must be changed.

Azerbaijan and Armenia for over two decades have been locked in conflict, which emerged over Armenian territorial claims. Since the 1990s war, Armenian armed forces have occupied over 20 percent of Azerbaijan’s internationally recognized territory, including Nagorno-Karabakh and seven adjacent regions. The UN Security Council has adopted four resolutions on Armenian withdrawal, but they have not been enforced to this day.