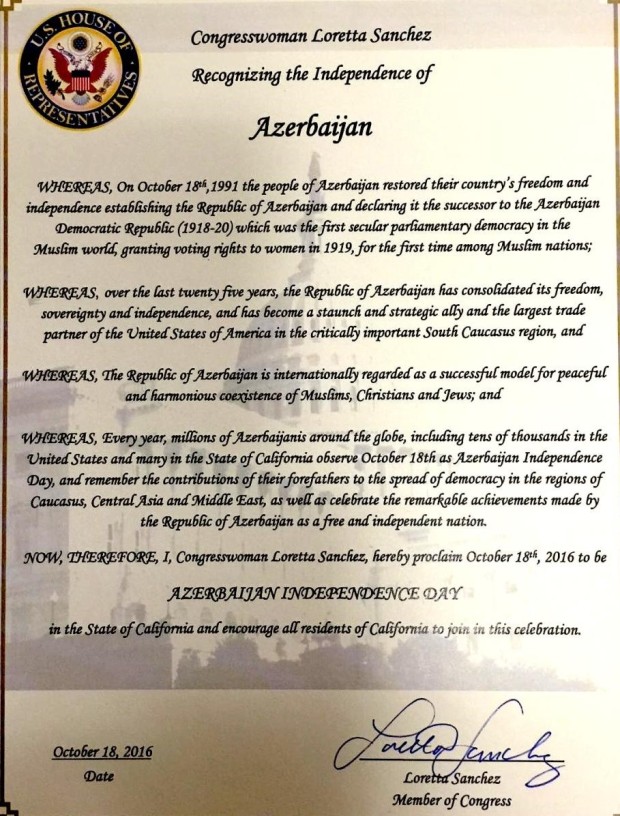 Sent to Azerbaijan’s Consulate General in Los Angeles, the proclamation reads: “On October 18, 1991 the people of Azerbaijan restored their country’s freedom and independence establishing the Republic of Azerbaijan and declaring it the successor to the Azerbaijan Democratic Republic (1918-20) which was the first secular parliamentary democracy in the Muslim world, granting voting rights to women in 1919, for the first time among Muslim nations”

The document further states: “Over the last twenty five years, the Republic of Azerbaijan has consolidated its freedom, sovereignty and independence, and has become a staunch and strategic ally and the largest trade partner of the United States of America in the critically important South Caucasus region”.

The proclamation also notes that “the Republic of Azerbaijan is internationally regarded as a successful model for peaceful and harmonious coexistence of Muslims, Christians and Jews”.

The document concludes by stressing that “every year, millions of Azerbaijanis around the globe, including tens of thousands in the U.S. and many in the State of California observe October 18th as the Azerbaijan Independence Day, and remember the contributions of their forefathers to the spread of democracy in the regions of Caucasus, Central Asia and Middle East, as well as celebrate the remarkable achievements made by the Republic of Azerbaijan as a free and independent nation.”