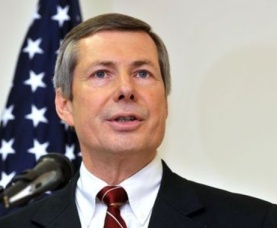 No meeting is planned between Azerbaijani and Armenian foreign ministers on the settlement of the Nagorno-Karabakh conflict at this time.

U.S. co-chair of the OSCE Minsk Group, James Warlick announced about on April 25, while talking to Tend.

“While we do not have any meetings of the ministers planned at this time, we are in constant contact with them to lay the groundwork for the sides to begin a negotiation on a settlement [of the conflict] under the auspices of the [OSCE Minsk Group] co-chairs,” he said. “We are ready to meet with the ministers at any time.”

Armenia captured Nagorno-Karabakh and seven surrounding regions from Azerbaijan in a war that followed the Soviet breakup in 1991. More than 20,000 Azerbaijanis were killed and nearly 1 million were displaced as a result of the war.

The peace talks have been largely fruitless so far despite the efforts of the co-chair countries over 20 years.

The sides to the conflict currently hold talks based on the renewed Madrid principles, which envisage return of occupied territories surrounding Nagorno-Karabakh to Azerbaijani control, ensure the right of all internally displaced persons and refugees to return to their former places of residence, future determination of the final legal status of Nagorno-Karabakh and etc.