Laman Hendricks represents Azerbaijan in various dance festivals around the USA and the world. She has gained renown for both male and female dances of the Caucasus region. Along with her dance, she participates in local and international events where she promotes the culture, history and traditions of Azerbaijan. She has performed dances such as Sari Gelin (Yellow Bride), Terekeme, Vagzali (Train Station), Vokaliz, Ag Ciceyim (White Flower), Vocalize (male dance) and Georgian dances such as Khanjluri, Kazbekuli.

Laman Hendricks was born in Ganja, Azerbaijan. She started classical ballet training at age three in her hometown. After a few years she was selected to be an acrobatic gymnast. At age 11 she moved to Baku, the capital of Azerbaijan, and continued her training there. Along with gymnastics and classical ballet she studied the national dances of Azerbaijan, Georgia, Uzbekistan, Tajikistan, Russia, India, and many more.

She moved to Europe and after a few years she returned to her home in Azerbaijan. She continued her career and was trained in acrobatic gymnastics by International Judge and Head Coach of the Azerbaijani National Team, Irada Gurbanova, and in folk dance by Nominated Artist of Azerbaijan, Elchin Qedimov.

In 2012 she moved to Anchorage, Alaska, where she founded Dances Of Caucasus.  In 2015 Laman competed at the Rakkas Istanbul International Oriental Dance Festival taking third place as a soloist in Folk dance and third place in the Group Bellydance categories. 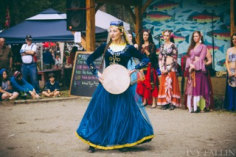