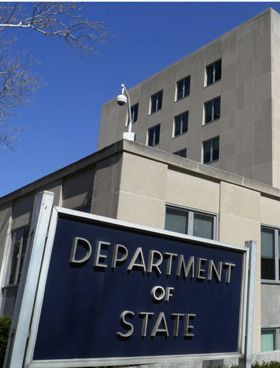 Azerbaijan is a reliable partner for energy diversification and achieving common goals to improve energy security, said Robin Dunnigan, the US Department of State deputy assistant secretary for energy diplomacy.

She made the remarks June 1 at a meeting with Azerbaijan’s Energy Minister Natig Aliyev in Baku.

Dunnigan noted that the US will continue to support Azerbaijan.

She also praised the level of cooperation between Azerbaijan and the US in the sphere of energy and Azerbaijan’s role in implementation of the Southern Gas Corridor project.

Azerbaijan’s Energy Minister Natig Aliyev, in turn, said the work on the Southern Gas Corridor project is being conducted according to the schedule and 70 percent of the work on the Shah Deniz 2 and the South Caucasus Pipeline has already been completed.

He also noted that the Southern Gas Corridor will allow supplying gas to the EU countries not only from Azerbaijan, but also from Central Asia, Egypt, Iraq and Iran.

Currently, the construction of the Gas Interconnector Greece-Bulgaria (IGB Pipeline) stands on the agenda, he added.

Natig Aliyev also said it is expected to construct pipelines from Italy to its northern neighbors, as well as from Albania to the Balkan countries.

It was noted during the meeting that Total, together with its partners, is making efforts to start production at Azerbaijan’s Absheron field in the coming years.

Currently, a plan is being prepared to develop the Absheron block, which is located in the Azerbaijani sector of the Caspian Sea.

The Southern Gas Corridor is one of the priority energy projects for the EU. It envisages the transportation of 10 billion cubic meters of Azerbaijani gas from the Caspian Sea region to the European countries through Georgia and Turkey.

At the initial stage, the gas to be produced as part of the Stage 2 of development of Azerbaijan’s Shah Deniz field is considered as the main source for the Southern Gas Corridor projects. Other sources can also connect to this project at a later stage.

As part of the Stage 2 of the Shah Deniz development, the gas will be exported to Turkey and European markets by expanding the South Caucasus Pipeline and the construction of Trans-Anatolian Natural Gas Pipeline and Trans-Adriatic Pipeline.