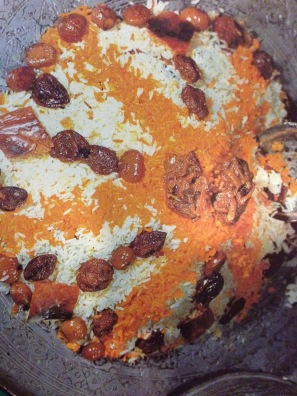 Plovs of many nations presented in Baku.

Appetizing aroma of rice attracted many gourmets of Baku to the second International Plov Festival held in the capital city on December 11.

The event that took place in the Sarin restaurant became a wonderful holiday for the capital’s residents and guests, who come to taste different types of plov.

Rice is a popular dish in many Eastern and Asian countries, and every country has its own delicious version of plov.

Cooks from Azerbaijan, Turkey, Iran, Indonesia, Saudi Arabia, Korea, Japan, Uzbekistan, Tajikistan and other countries, where rice is considered an integral part of their national cuisine, welcomed the guests with delicious plovs.

Head of the National Cuisine Center Tahir Amiraslanov, addressing the event, said that the festival aims to give an opportunity for the nations to familiarize with one another’s dishes.

Among the variety of national dishes, Plov, which is considered a “king” of Azerbaijani cuisine is the most famous and favorite one.

Azerbaijan has more than 60 different kinds of plov. Someone likes plov with cherries, pumpkin, fennel, dried fruits, beans or meat. But one thing unites them, that no one can remain indifferent to the Azerbaijani plov.

However, not everyone can boast of a cooking this hearty dish, and for an inexperienced cook it may seem very difficult to prepare, as it should never be sticky.

Every Azerbaijani holiday, whether it is the celebration of springtime – Novruz Bayram — or a special occasion such as a birthday or other important family event, always includes plov, often called “Ash” here.

Served on special occasions, plov is the final savory dish at wedding feasts and is brought in with great ceremony.